Forgive me a moment while I wail in despair.

WHY? WHY MUST THE TASTIEST FOOD BE BAD FOR YOU? WHHHHHYYYYYYY?

Okay I’m done, back to business.

Let me start this post by saying I like junk food just as much as the next guy; unfortunately it is a sad truth that it is bad for you, in more ways than one. In this post I am going to talk about a junk that I, and I am sure most of you like, but is terrible to take when you are stressed: chips or as people in  the US call it, French fries. 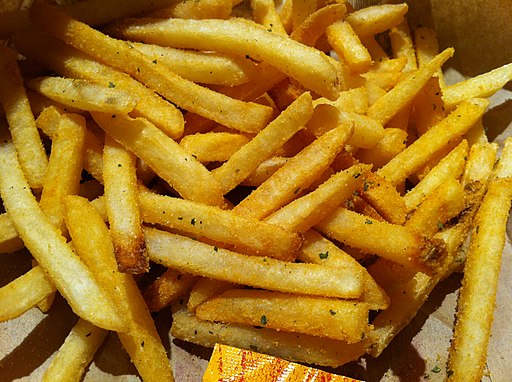 By Himgspendra (Own work) [CC BY-SA 3.0], via Wikimedia Commons

Chips are basically long strips of potatoes which are normally served as a side dish but they can also be eaten alone; people sometimes eat them with various sauces as well. While eating chips won’t actually cause stress for the most part, it isn’t a good idea to take them when you are stressed.

Let’s look at this article posted on huffingtonpost.com called, “Stress, Fried Foods Contribute Equally to High Blood Pressure, Study Shows.” In this post they discuss how stress and any food with a high amount of salt/sodium in it – like chips – can lead to high blood pressure or hypertension. A study conducted by Dr. Gregory Harshfield, a researcher at the Institute of Public and Preventive Health at Georgia Health Sciences University conducted the study which showed that both stress and chips contribute equally to high blood pressure. The rest of the post talks about how our body tends to retain more salt when we are stressed, which eventually builds up and can lead to problems in the future. So while they don’t say so themselves, I think it is safe to assume that eating chips when you are stressed just adds to your problems even if you do feel a little good for eating a tasty snack.

Next we have an article from cbsnews.com titled, “Stress, fatty food may slow metabolism”, written by Jessica Firger. In this article they talk about how we tend to crave fatty foods when we are stressed and how this study shows that stress can slow down our metabolism, making it easier for the body to absorb fat and sugar. The study was conducted at Ohio State’s Clinical Research Center and published in the journal Biological Psychiatry. In the study 58 women were given some food after they had experienced a stressful event, and the researchers then monitored their metabolic rate and found that the women who experienced significant stress burned 104 less calories than the woman who experienced little to no stress.

This tells us that stress doesn’t just make us feel bad; it can make us fatter as well, which can lead to a whole other lot of stress and problems.

As sad as it is, it’s clear that you should avoid chips and junk food in general when you are stressed out. But hey look at the bright side, you don’t have to give up on chips altogether, you just need to keep yourself in check and eat once in a while instead.