Jenga blocks, a game about precision, geometry, physics, perfect hand eye coordination, dexterity and speed. Jenga blocks or Jenga is a classical block stacking game in which you have to keep making an ever growing tower using only 54 rectangular blocks that are always three times longer than its width, and one fifth as thick as its length, so the dimensions can be as you like, as long as they follow the 3 : 1 : 0.5 ratio. Some blocks have small variations to these dimensions to create imperfections in the stacking process and adding a bit of challenge to the game.

Confusing? Let me explain it better. 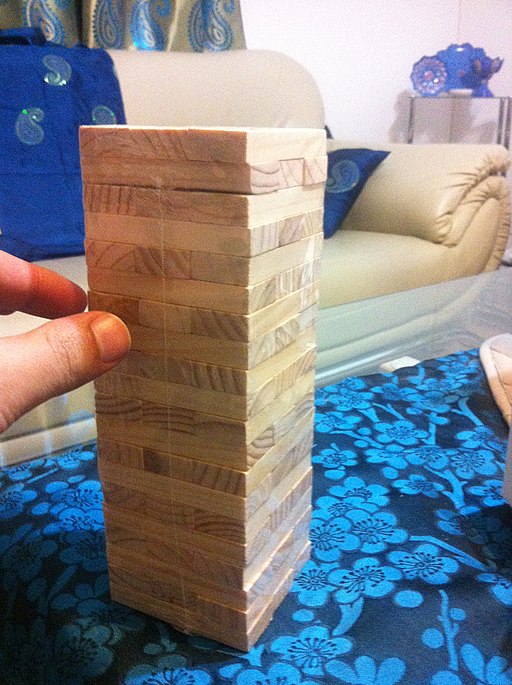 Once that is done you can start playing the actual game.

Now for a little history, yes I said history, history isn’t always boring and I swear it’ll be quick. Jenga was created by a woman named Leslie Scott who is the co-founder of Oxford games Ltd. It is based on a game that evolved within her family during the 1970s using children’s wooden blocks. She first introduced the game to the world in the London Toy Fair in January 1983. Through a series of various meetings and business deals, Hasbro became the licensee of Jenga in various countries. It is believed that an estimated 50 million Jenga games have been sold worldwide to this day; that’s a lot of Jenga blocks!

There are a lot of variants to the game too, like:

In case you are wondering, I got the information for all of this from these sites:

To tell you the truth I have never played Jenga before. I’ve watched other people play it and it looked like a lot of fun but I never played it myself which I find really strange now that I think about it. Usually Jenga is played with other people but I think you can play it by yourself too, it probably won’t be as fun but it is still possible. There is a lot of concentration involved in this game which is why I think it would be great for stress and anxiety because you will be completely focused on not letting the tower fall. So if you get the chance to, then play Jenga, preferably with other people. Improve your concentration and dexterity, improve your hand eye coordination and most importantly, have fun.