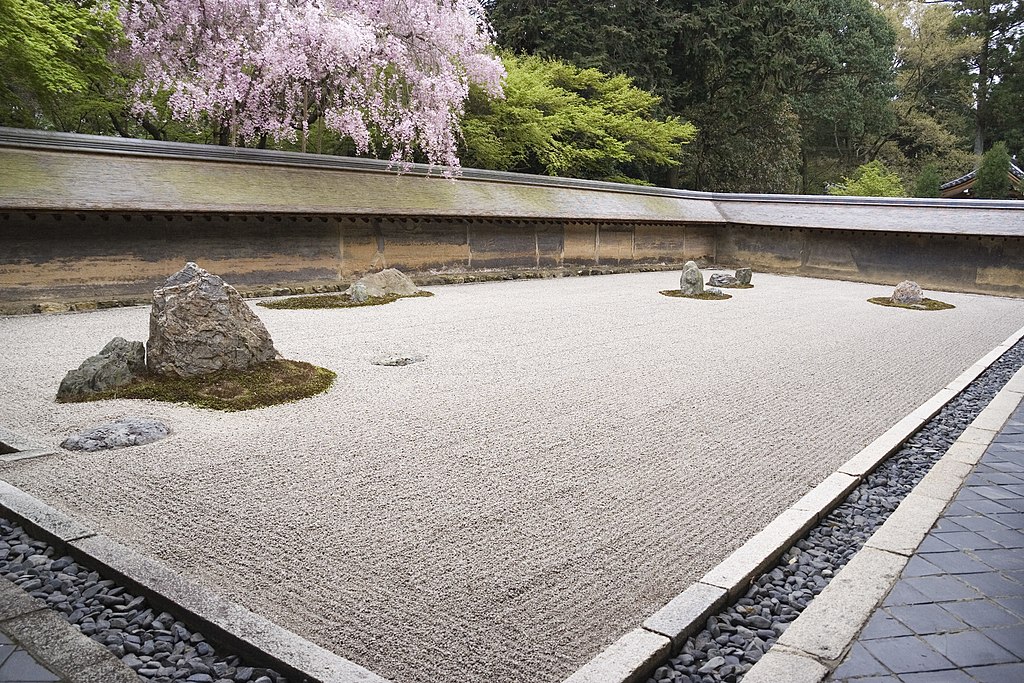 How many of you have heard of a Zen garden? A Zen garden – also called a Japanese rock garden- is a miniature stylised landscape which is made using rocks, water features, sand, gravel, moss, bushes and pruned trees. The gravel/sand is raked and the lines made are meant to represent water ripples. Zen gardens are relatively small, usually surrounded by a wall and are meant to be seen from a single vantage point, like the porch of a temple. Rock gardens were made to imitate the intimate essence of nature, not what they actually look like. They were also made as a sort of aid to meditation about the true meaning of life. There are even manuals on how to arrange a zen garden and what each arrangement symbolises. The first zen garden manual was called Sakuteiki (Records of Garden Keeping). I should tell you though; I got all of this information from Wikipedia so some of it may be wrong, just keep that in mind. You can read more about zen gardens as described by Wikipedia here.

Fun fact: According to the same Wikipedia article, in the olden times some Zen gardens had political messages behind them. According to the Sakuteiki that I mentioned earlier, “Sometimes, when mountains are weak, they are without fail destroyed by water. It is, in other words, as if subjects had attacked their emperor. A mountain is weak if it does not have stones for support. An emperor is weak if he does not have counsellors. That is why it is said that it is because of stones that a mountain is sure, and thanks to his subjects that an emperor is secure. It is for this reason that, when you construct a landscape, you must at all cost place rocks around the mountain.”

Anyway, getting back on topic: Zen gardens. It’s easy to see how and why they are relaxing. You have:

These are just some of the points I can think of to explain how a zen garden can help calm us down, I’m sure that there are a lot more.

Now here’s the thing; I’m pretty sure most of us don’t have the resources to build our own physical Zen garden. So what does that mean? Do we just give up on it and move on? Of course not, why would I tell you all about it otherwise? I can’t give you a real Zen garden but I can give you the next best thing, a virtual one.

Here we have a virtual zen garden. Granted all you can really do is rake the sand and create patterns, but hey, don’t knock it till you try it, it can be really relaxing if you let it.

Of course if you really want complete control and a zen garden on a screen won’t do it for you, you could always do what this guy did.

Just get a box, some sand, and some pebbles and you can make your own little zen garden. It’s a very good idea and I thank this YouTuber thedarkener for sharing and showing it to me and all of us. I might just go and try it out for myself. Sure there will be a little work involved but so what, if you ask me it will be worth it. The only thing I’m not so sure of is where I can get a little rake; maybe I could use a plastic fork instead. Plus it beats having to take care of a big one like in Japan and such.

And so we have one more thing we can use to calm ourselves down. Whether you end up using the screen garden or make on of your own, I hope it works for you.