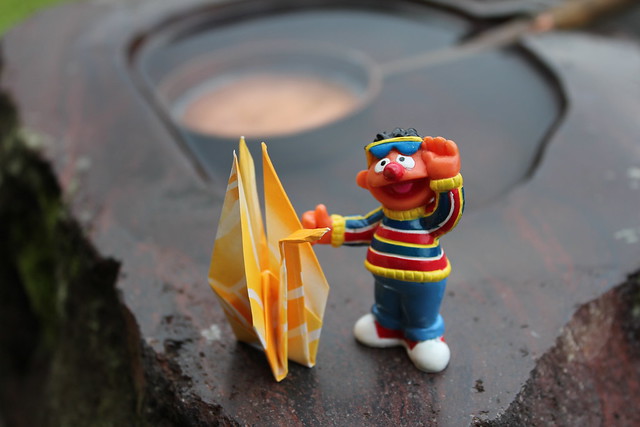 A lot of people say that a good way to relieve stress is to take up a hobby of some sort. The reason behind this is to take your mind off of everything else, not just the things that stress you out, but everything else. The idea is to put your mind into a Zen like state of calm and relaxation thus rejuvenating yourself mentally and emotionally (at least that is what I think you’re supposed to get out of it). Also, having a hobby gives something else to do in your life other than work or studying and what not; it gives a feeling of fulfilment and purpose other than filling up forms and paperwork for a boss who doesn’t even go through them.

Just like before, I plan to make a series of posts about different hobbies and what I think of them. In this post I’m going to talk about a rather simple hobby that anyone can do, as long as you have just a little free time on your hands: origami.

Origami is the art of folding paper into various new shapes such as birds, butterflies or even dragons if you’re skilled enough. The name comes from the Japanese words ori, meaning folding and kami, meaning paper. Although the name may come from Japan, historians have documented distinct paper folding traditions that have arisen in Europe, China and Japan over the years.

Now, I’m not very good at origami, but I like doing it all the same. There’s no cutting involved, just folding, and it’s amazing what you can do with a piece of paper. And this art is not just limited to paper; in the old days in Europe, people used their own folding techniques on napkins and such; of course the types of folds were different but the basic idea is still the same. Nowadays, we associate origami only with paper, and that is what I am going to focus on, in this post.

So how can origami benefit us? Well this article from the Origami Resource Centre has a thing or two to say on that front. According to the article, care-providers and researchers have found that origami can help people suffering from various medical conditions. It also says that it helps people suffering from anxiety, low self esteem and other psychological issues. People who suffer from depression have said that origami gave them hope of something better. I myself have suffered from depression and I can say this, origami gives me a feeling of meaning and a sense of purpose. I can’t explain what it is, but whenever I successfully make a paper butterfly or a crane I feel like I’ve achieved something; it may be small when you compare to the grand scheme of things, but that sense of achievement, for someone who feels depressed and anxious, it is a feeling like no other. Like someone finally tossed me a life raft after I’ve been flailing in the water for so long.

So the next time you feel down in the dumps or strung up too tight, give origami a try, it’ll help lift your spirits and loosen you up. I’ll leave a link to a site that has some instructions on origami creations.

All you need to do is fold some paper, what have you got to lose?